This is a recent article in Motorhomes Caravans & Destinations Magazine

Heather Whelan goes off the beaten track and discovers tourism gems hidden in the township of Puketapu, near Napier

With its beautiful Art Deco buildings and stunning street art, Napier is a drawcard for visitors to the Hastings region. The city also has an excellent network of cycle trails, north and south, that leads to beautiful beaches, seaside settlements, and past vineyards and wineries. 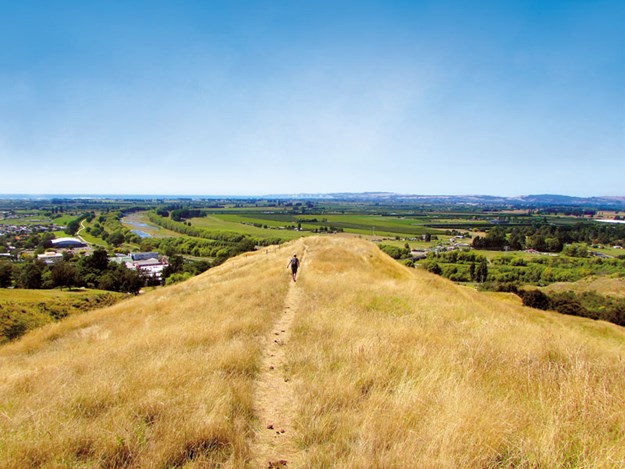 But as motorhomers know, there are often hidden gems to be found by venturing off the beaten track. My partner Malcolm and I discovered some when we headed inland to cycle the Puketapu Loop, a circuit along the banks of the Tutaekuri River.

The cycle ride can be started in Taradale, but we began in Puketapu village, parking opposite the pub and store. (We had left our motorhome at the NZMCA park in Napier and taken our bikes on the car, but there are freedom camping areas in Puketapu.) A sign on the tavern wall featured a bicycle and set the scene for the expedition.

Lonely Planet has listed this ride as one of the 10 most beautiful in New Zealand and it certainly lived up to its reputation. The cycle trail took us from the village to the banks of the river, and then beside the river through some of Hawke’s Bay’s lush, fruit-growing countryside. After about 7km of easy cycling we saw some high cliffs, topped with wooden palisades and left the trail to investigate further.

Across the road, we came to a carved gateway, full of information panels. We learned that this was Otatara Pā Historic Reserve, which encompassed the palisaded pā we had seen from the cycle trail and, on the hilltops behind, the site of Hikurangi Pā. The pā complex covered more than 40ha and was one of the oldest and largest in the area, with access to a range of natural resources.

It is of archaeological importance because it has retained its features: Heritage New Zealand has listed the pā as a category one historic place. Leaving our bikes at the entranceway, we walked up a wide track to Otatara Pā. On the slopes beside the trail, atmospheric carved pouwhenua (poles) stood tall beside cabbage trees and pockets of bush.

In the 1500s, the pā was fiercely fought over because of its position and proximity to resources. It was eventually abandoned and made tapu because of the numbers who had died in the fighting. From the clifftops, it was easy to see why this would have been a great place for Māori tribes to live.

The earthquake of 1931 altered the landscape. But, before this, the land between the pā and the coast would have been a network of estuaries, lakes and wetlands, good for food-gathering and waka travel. Our view was of neat blocks of horticultural land, paddocks and, in the distance, the white headland at Cape Kidnappers.

Turning inland we followed a narrow track through dried brown grass uphill to the summit of Hikurangi Pā. On the way, we read signs that explained that when this was a thriving settlement, there were terraces for housing, gardens and kūmara storage areas.

From the ridges and the summit, the views were amazing – across hills to mountain ranges in the distance. Apparently, on a clear day, Mount Ruapehu can be seen. After taking in the scene, we followed the loop track down to the entrance gateway.

The reward at the end

Back on the cycle trail, we crossed a bridge over the Tutaekuri River and began to ride back towards Puketapu. This side of the river had more trees, giving the trail a woodland feel. It didn’t seem long before we reached the outskirts of Puketapu, the track ending at Vicarage Road.

Puketapu has a lovely, relaxed ‘village’ feel. We cycled past Saint Michael and All Angels Church, a pretty wooden building dating to 1910, before arriving back at the parking area. Across the road, the village store, complete with petrol pumps, stood beside the Puketapu Hotel, a typical country tavern.

The original pub was built in 1885 but, like so many of New Zealand’s old wooden buildings, it was destroyed by fire. The present tavern dates from the 1920s. We headed inside, feeling sure that with all our cycling and walking, we deserved a good lunch.

Billed as an award-winning, classic Kiwi country pub, the bars and outdoor area were packed. We grabbed the last table and ordered. We weren’t disappointed. The day had proved that sometimes the most interesting and memorable things can be found just off the beaten track.

One thought on “Puketapu”

Latest: Everything's Shipshape - Denmark's Ladby Viking had a burial like no other boat before... NZ Listener April 15-21 issue.