This was recently published in Motorhomes caravans & Destinations Magazine

It’s known as the Mackenzie region, but we call it ‘lupin-land’. Some people consider lupins a weed on a par with broom and briar but, judging by the number of people taking photographs at the roadsides, others find them as beautiful as we do. 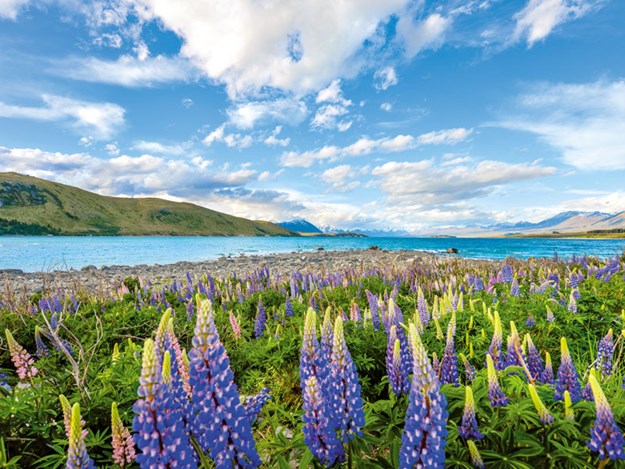 A local woman, Connie Scott, planted £100 worth of seeds along the verges in 1949 – just wanting to make the area more beautiful. The lupins thrived and spread and now, from November to February, swathes of the flowers can be seen.

Vast areas of pink, red, purple and lavender lupins frame views of turquoise lakes and snow-capped mountains. Connie Scott is buried in Burkes Pass Cemetery, and is remembered on her tombstone as the ‘lupin lady’.

The story of Mackenzie

We entered the Mackenzie District at Fairlie, a small town that markets itself as the Gateway to the Mackenzie. Fairlie has four distinct seasons. Summer boasts long, hot days. Spring is colourful with flowers and blossom.

In autumn, the tree-lined main street puts on a show of gold and orange; in winter, it may be dusted with snow. (Fairlie is popular in the winter, as it is close to the Mount Dobson ski field.) We visited in summer, the area basking in long, hot days, and found Fairlie an interesting place to visit, if only for a coffee and a stroll.

For those who want to stay longer there is a holiday park, and freedom camping is permitted behind the Grand Hotel. In the centre of Fairlie, we admired a memorial statue of James Mackenzie and his dog, Friday.

Mackenzie was a Scot who arrived in New Zealand from the Australian gold rushes. In 1855, he was apprehended with 1000 sheep belonging to the Rhodes Station, which he had driven from nearby Timaru. John Sidebottom, the station overseer, and two Māori shepherds had pursued Mackenzie to the inland pass that now bears his name.

Mackenzie pleaded innocence and fled to Lyttelton where he was recaptured, tried and sentenced to five years’ hard labour. After escaping twice from prison, his case was reinvestigated, and he was pardoned. Mackenzie returned to Australia and obscurity.

But, in the South Island, he became a Robin Hood-like folk hero, admired for his rebellious nature, brave escapades and extraordinary ability as a shepherd. When Mackenzie was caught, the pursuing shepherds noticed signs that this wasn’t the first huge mob of sheep he had smuggled through the pass to Dunedin, where they would have been sold.

Mackenzie and his dog became symbolic of the struggle of the ordinary emigrant, trying to make a living in the new country. His feats of exploration are now recognised: he was the first European to discover the areas now known as the Lindis Pass, Mackenzie Pass and the Mackenzie Basin. This whole district is named after the sheep rustler.

We followed in Mackenzie’s footsteps, driving a circuit from Fairlie. State Highway 8 loops north and west to Burkes Pass. There, we stopped to admire the pretty, gothic-style Saint Patrick’s Church and read the information panel that describes the Burkes Pass area.

The village itself is tiny and looks hardly changed since its pioneering heyday. At the interestingly named Dog Kennel Corner, we turned onto Haldon Road. The scenery here is amazing – a dusty basin stretching across to distant snow-capped ranges. It isn’t hard to imagine Mackenzie passing by, driving his herd of stolen sheep before him.

A short way along Mackenzie Pass Road, we came to a small, three-sided monument. On each face, the same story is told – in English, Māori and Gaelic. “In this spot, James Mackenzie, the freebooter, was captured by John Sidebottom and the Māoris Taiko and Seventeen and escaped from them the same night, 4th March 1855.” It’s a remote place now and must have been considerably more isolated more than 150 years ago.

We spent a few days at Lake Opuha, just north of Fairlie, where there are three freedom-camping areas from which to choose. Lake Opuha is a lovely spot, with expansive views of the lake and mountains. We found a lakeside path that took us around to a dam, where sailors and kayakers were enjoying the calm waters.

Next, we checked out the more well-known and tourism-orientated Lake Tekapo. The NZMCA park where we stayed was a contrast to the Lake Opuha site – it is hidden away in a clearing in a pine forest. We walked from here around the lakeside into Lake Tekapo township, passing the famous church of the Good Shepherd.

Built in 1935, this church has become one of the most photographed buildings in New Zealand because of its attractive structure and the picturesque backdrop of lake and mountains. The church was built in recognition of the pioneers of the Mackenzie Country.

Nearby is a bronze statue of a collie dog, a memorial to the working dogs that assisted the pioneering leaseholders and farmers. There is a wealth of activities to choose from at Lake Tekapo, including canoeing, jet-boating, yachting, fishing, tramping, cycling, golf and walking.

We followed a walking track to the summit of Mount John, home to the Mount John Observatory, one of the best places in the world to observe the night sky. The observatory houses New Zealand’s largest telescope and there are tours for those who want to view the evening or night skies.

During the day, we discovered the breath-taking views of Lake Tekapo, Lake Alexandrina and Lake McGregor as we walked the three-hour loop to the summit of Mount John. The elevation gain is 311m, so I was glad of the excuse to stop and take photos.

After exploring the mountain top, we had a coffee at the aptly named Astro Café before heading back down to the lakeside, where we soaked our aching legs in the hottest of the Tekapo Springs hot pools. Each pool is shaped like one of the district’s lakes: Ohau, Pukaki and Tekapo.

Next stop on our itinerary was lakeside at Lake Pukaki, where there is a large area for freedom camping near the dam. A track beside the lake is part of the Alps to Ocean cycle trail, although we just meandered a few kilometres and back again on our bikes.

Christmas was approaching, and we pulled out a tiny wilding pine to decorate our bus. Although it was summer, the glacier-fed lake water was icy, and only a few brave tourists attempted a quick dip.

We left our bus parked beside Lake Pukaki and drove by car to Aoraki/Mount Cook. This World Heritage site covers more than 70,000ha and includes New Zealand’s tallest mountain and largest glacier. There are several walks here, ranging between 10 minutes and an hour.

We wandered around for a couple of hours admiring the splendour – where else in the country can you go for a stroll and see icebergs? The Mackenzie Country is full of contrasts and is well worth exploring.

One thought on “Discovering Mackenzie Country”

Latest: Everything's Shipshape - Denmark's Ladby Viking had a burial like no other boat before... NZ Listener April 15-21 issue.